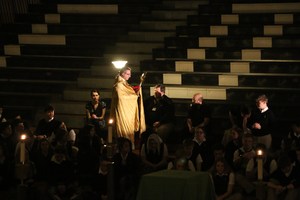 In preparation for the Lenten season, Bishop Foley Catholic hosted an Eucharistic Adoration service on Tuesday, February 6.
Last week Foley hosted our second Eucharistic Adoration. It is a very moving experience. While the gym can be a very large space, it quickly became a quiet and peaceful space for the Adoration. Lights were turned off and the space was illuminated strictly by candles and a few lamps. An altar was placed to the center of the space with the monstrance displayed on it so the sole focus was the Eucharist. Music, led by Dr. Daniels, was performed throughout the Adoration. Prior to starting, students were asked to take a seat on the floor. The Adoration provides a perfect quiet time for students to pray, reflect and grow with Jesus.
I was curious how the Foley Family perceived the Adoration service and checked in with Mr. Pullis to get his input. He said that several students mentioned about how powerful the experience was.

"One student mentioned how she felt weighed down by many concerns and worries. She approached the altar and touched Jesus in the monstrance. Immediately she felt all the weight of her worries and concerns were lifted from her as she cried tears of joy. She said it was so awesome!
Gradually students began falling to their knees, approaching the altar to touch Jesus in the monstrance, just like the scene from Luke where the crowd is pressing in on Jesus with the hope they can just touch Him. It was deeply moving experience that was truly a grace and privilege to witness," stated Mr. Ken Pullis.

Mr. Pullis was very gracious and gathered anonymous quotes from his students. He felt that they'd be a little more open with their thoughts being anonymous and he was right. Here are just a few of the quotes...
"During the Adoration, I was able to be with Jesus. I had time to pray in isolation from others, but also felt like I was not alone. We were all able to spend time collecting our thoughts and ask questions and just have a conversation with our Creator. Having everyone experience this journey to have together, but all in their own ways is amazing to witness and participate in."
"Focusing on the tabernacle and knowing Jesus is right there in front of you."
"Being silent in the presence of Jesus really makes me feel at peace in my mind and soul. During this time, I am able to just talk with Jesus and tell him how my life is going. Adoration here at Foley really changed me as a person by helping me realize that Jesus is always with us to talk and pray with us."
"I was able to completely give myself up to the experience of Adoration. It was something that I don't get to do very often, and having the entire school come together to do it was very special. The quiet and reverent respect that I saw among the majority of people was moving, and it was something that I don't think I will forget anytime soon. Adoration is an important aspect of what we believe as Catholics, and it was wonderful to have been given the opportunity to be able to praise Jesus in a way that can have multiple meanings."
"The music and the dim lights added to the peaceful environment. All the students were taking it seriously and I even noticed some people were moved to tears. The most memorable part of Adoration was a shiny and bright Jesus in the middle in which we were able to go up and touch."
Source: Jessica Knapik
Print