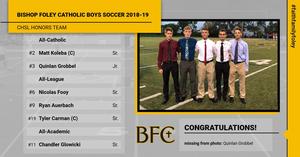 On Wednesday, October 10th the CHSL awarded All-Catholic, All-League, and All-Academic honors
Boys Soccer players were honored last night in between the CHSL championship games for their accomplishments this season. The potent offensive duo of Matt Koleba and Quinlan Grobbel earned All-Catholic honors. Midfielder Ryan Auerbach earned All-League honors along with the defensive duo of Nicolas Fooy and Tyler Carman who have been stellar against opposing teams best offensive players. Chandler Glowicki earned All-Academic honors for his work on the field and in the classroom. Congratulations to all of these young men for their hard work and leadership.
Print