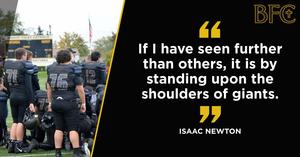 Ventures fell to the Bulldogs in the Pre-District
The Bishop Foley Catholic Ventures Football team played in their first playoff game since 2013 against the Loyola Bulldogs. The Ventures scored first on a 5 yard run by Kendel Taylor to take the lead but it was all Bulldogs after that. Klayton Cornell and Braden Mussat would connect late in the game for a 29 yard touchdown reception. This dynamic junior duo will return next year with plans for many more connections in the same fashion. The Ventures fell 62-15 to the Bulldogs but that doesn't take away from the historic season the team had this year.  That includes the most wins in schools history, a co-league championship, most rushing yards in a single season, most passing touchdowns in a season, and most points in a season. Coach Barnes and the team have set a high bar for the future. It was the last game for Ben Alderson, Matt Brady, David Burns, Joey Laino, Sam Siepker, Nicholas Soller, John Stickney, Kendel Taylor, Aidan Tierney, and Jerry Thayer. The commitment and hard work of these seniors has set the foundation for the team as it looks toward the future and we thank them!
Print