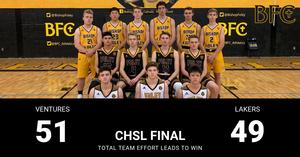 Ventures defeat Lakes 51-49 in their first league road game.
Ventures picked up a key win on the road against Our Lady of the Lakes on Friday, December 21st.  BFC opened up a 16 point lead to start the game but the Lakers would not give in. The Ventures led 29-23 at the half. Lakes narrowed the lead to 3 heading into the 4th quarter as both teams played hard in their first match up of the season. Quinlan Grobbel hit two three late in the 4th to give the Ventures a 8 point lead but Lakes again would rally to pull within 2 with 5 seconds left. Senior Mike Maten came up big with a steal with 2 seconds left and the Ventures came away with the 51-49 victory. Senior Sam Siepker led the scoring with 16 points. Junior Quinlan Grobbel in his first start scored 11 points. Mike Maten and Matt Brady both added 8 points. It was a total team effort for the Ventures as they grabbed their 1st league win. The team is off until Saturday, December 29th as they face Troy Athens in the Motor City Round Ball Classic at 11:40 AM at Ferndale High School.
Print