Girls Basketball Takes Down the Cardinals 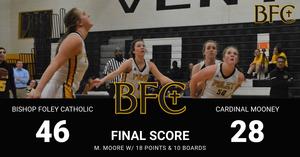 BFC Girls Basketball defeated Cardinal Mooney in league play
Girls Basketball shook off the Christmas break doldrums in the 2nd half of the their first league game against Cardinal Mooney before pulling away for the 46-28 victory. The Ventures held a 1 point lead at half but their defense kicked it into high gear as they held the Cardinals to 8 points in the 2nd half. The team was paced by Melanie Moore who came off the bench to score 18 points and grab 10 rebounds. Mary Ruth Oster added 9 points all from shots behind the arc. Kayla Moore continued her strong play with 9 points, 6 rebounds, and 3 assists. The team next plays on Wednesday as they travel to Cranbrook for another league match-up.
Print