BFC Participates in the March for Life in Washington, D.C. 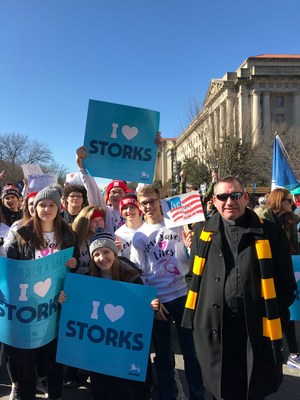 Select number of BFC students, faculty and chaperones took a trip to March for Life in January.
It has been forty-five years since the U.S. Supreme Court made the decision in the Roe v. Wade case to legalize abortion. Since then, 60 million lives have been lost. Every year since, pro-life supporters have marched in Washington, D.C.
Earlier this month, Bishop Foley Catholic High School President, Father Gerry LeBoeuf, along with students, parent chaperones, and teacher chaperones made a bus trip to Washington, D.C. with a specific goal in mind… to march for life and to be a voice for the voiceless. In preparation for the march, students had designed t-shirts with the year’s theme, “Love Saves Lives.”
Foley students were moved by the peaceful demonstration and experience in Washington, D.C. During a school mass on Tuesday, January 23, four students shared their personal stories. BFC junior, Evan Similuk explained that he saw a truck driving around to spread the word about being pro-life. On the truck were pictures of aborted babies. Seeing those images firsthand, made him sick to his stomach.
Clare Walby, a BFC junior, indicated that one of the most impactful moments was seeing many brave women holding up signs that mentioned they regretted their decision to have an abortion. Walby stated, “I never understood what it truly meant to support the Pro Life movement until I attended the March for Life in 2017. My experience was so positive and influential that I chose to once again make the eight-and-a-half hour trip to Washington, D.C. with fellow Foley friends in 2018.”
As Catholics we are called to protect the dignity of life. Foley students that attended this march learned firsthand the importance of this peaceful demonstration and message. Innocent lives are being taken and we need to be a voice for the voiceless.
Print