General member and club representative meetings are held once a month in The Pit.

The Drama Club covers a wide range of topics including history, makeup, components of the performance, design and production. Every year, the club presents four school productions. A one act play is held in October, fall play in November (alternating yearly between a comedy and drama), spring musical in March and student run production in the spring. Auditions for each play take place just prior to the rehearsal process starting, so students that are not in earlier productions still have the chance to be cast in later productions. 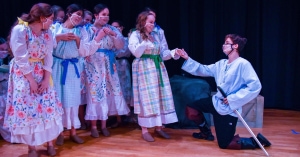 Where will you venture to next?